September 25, 2013
I thought I might try something new on Wednesdays. What's Up Wednesday is a weekly blog hop created by Jaime Morrow and Erin Funk to help writers stay in touch. 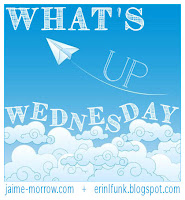 What I'm Reading
It's a complicated mixture right now. My main focus is on The Fellowship of the Ring by J.R.R. Tolkien for a class (on Tolkien). I have about two weeks to read it so that's taking a good amount of my time. Also on my shelf with bookmarks in them are Sea of Monsters by Rick Riordan (a reread I started before the movie came out, to give you an idea of how long I've been at it) and Sense and Sensibility by Jane Austen.

What I'm Writing
The occasional short story that strikes my fancy mostly. I'm neck-deep in revisions for Cursed Kind. Some of the changes are relatively major so I need to be sure that they're making sense and fit with what's already there. Mostly clarifying motivations and upping the stakes.

What Inspires Me
My friends, in more ways than one. I have the three best roommates a college girl could ever ask for. Last weekend we went to the halloween store for costumes and ended up with masquerade masks. Which then inspired me to write a short story featuring them.


What Else I've Been Up To
TV. Lots of TV. The premieres for my fall shows began this week with Castle. Not at all happy with that premiere. Last night was NCIS (next week is going to break me) and NCIS: Los Angeles (mixed feelings). Then this morning I watched the premiere for Marvel's Agents of SHIELD and it was amazing. In non-airing television, I started watching Heroes last week and I'm so addicted. I finished the first season on Sunday and I'll be finishing season two today. Also, hockey (go Red Wings)! It's preseason but I missed this sport so much. I'm ready for the regular season to start.
what's up wednesday

Alison Miller said…
My friends are all kinds of inspiring too. :)And awesome that your Halloween store excursion inspired a story!

Melanie Stanford said…
I PVR'd Agents of SHIELD and can't wait to watch it!

Jaime Morrow said…
I'll second your "go hockey" comment! We're Oilers fans around here, and we're super excited that it has started up again. I completely forgot that Agents of SHIELD aired this week. Thanks for the reminder! I'm totally envious of your college status. I miss college so much! Though, getting through THE FELLOWSHIP OF THE RING would definitely demand more of my attention than I think I'd want to give it. I've read it a couple of times, but it was not an easy go. Good luck! :-)
September 25, 2013 at 1:10 PM

Miss Cole said…
I must remember to watch SHIELD. It starts Friday here.

I haven't read Fellowship in forever. One day I'll have to re-read LOTR.

Joss said…
I love it when inspiration comes from unexpected places. What a great post thanks for sharing.
September 25, 2013 at 2:46 PM

I'm glad you're having a good experience with your roommates. It makes such a big difference in your college life.
September 25, 2013 at 3:11 PM

Colin Smith said…
It's been a long time since I read LotR. That series in definitely on my re-read list, but I can't imagine I'll get to it soon. Too many books to read for the first time!

It's cool that your writing short stories. I need to do more of that, but I'm so determined to finish the revisions to my WIP, I can't really give much thought to any other writing projects.

Unknown said…
I haven't entirely decided if I'm happy or sad that TV is back now that it's fall. It can be very entertaining, but also a big time suck. I have several of my favorite shows (most of the same ones you mentioned) premires DVRed but haven't bothered to watch any of them yet.
September 25, 2013 at 5:29 PM

amy said…
I can't wait to see what they do to Ziva's character on NCIS. I loved NCIS LA this week, which is very rare for me. I have Agents of SHIELD on the DVR but haven't gotten around to it yet. Good luck with your writing! Have a great weekend!
September 26, 2013 at 12:35 AM

Bridgid Gallagher said…
Welcome to What's Up Wednesdays! It's such a fun blog hop - I've met so many awesome writers though it. I hope you like it!

THE FELLOWSHIP OF THE RING took me forever to read. I'm not sure why ... I love Tolkien's writing, but that one was a doozy for me. Erm, but hopefully it will go really fast for you! ;)