Showing posts from March, 2014
Show all

March 31, 2014
We're a quarter of the way through the year now and I can hardly believe it. The next time I do one of these, it'll be finals week.

Writing:
Word count: 9,975 words
I was hoping to beat out last month's record but I didn't quite make it. Though, there's still today left. I did start a new WIP, Siren, but I'm considering scrapping it because I'm not feeling the voices. I have two male main characters and they both sound the same to me. I do think the concept is worth saving for later.

Reading:
Read: 6
This is a new record for me this year, bringing my total up to 13. At this rate I'll only make it to 52 books for the year so I'm going to have to step up my game. This month included Seraphina by Rachel Hartman, Miguel Street by V.S. Naipaul, Waiting for Snow in Havana by Carlos Eire, and The Graveyard Book by Neil Gaiman.

Movies:
Watched: 1
I didn't quite realize how horrible I was doing with this until now. I watched John Carter while it was on TV…
Post a Comment
Read more

What's Up Wednesday is a weekly blog hop created by Jaime Morrow and Erin Funk to help writers stay in touch. I'm slowly forgetting what spring is supposed to be like. Every time it warms up and the snow starts to melt, the temperature drops and it snows again within a day or two. I am more than ready for spring.
What I'm Reading:
Still working on The Graveyard Book by Neil Gaiman. I hate that I don't have the time to read it that I wish I did. I'm also reading Waiting for Snow in Havana by Carlos Eire and I'll be finishing that up today. I usually sell back all of my books at the end of the semester, but I might actually keep this one. It's a fascinating memoir, beautifully written, with an inside look at Cuba before and after Fidel Castro.

What I'm Writing:
Big zero on this one. I still haven't been able to actually start writing the scenes I had ideas for last week. I'm hoping tomorrow there will be some room in the to do list for a bit of w…
1 comment
Read more

What's Up Wednesday is a weekly blog hop created by Jaime Morrow and Erin Funk to help writers stay in touch. The end of the semester hit me like a train. It always seems like the second half is busier than the first half. It's warmed up a bit outside but for some reason that's only translated to "It's never going to stop snowing."
What I'm Reading:
I've had to take a break from The Graveyard Book for work reasons but I'm more than halfway through now and loving it. The style does take some getting used to, but once that happens it flows well. For class, I'm reading Waiting for Snow in Havana by Carlos Eire. It's a memoir of a man growing up in Cuba and leaving for America when he was only eleven. It's raw, blunt, and poetically written at times. I'm enjoying it a lot more than expected.

What I'm Writing:
Siren is just under 4k at the moment. I had a major breakthrough on Monday where I finally figured out how the two main char…
3 comments
Read more 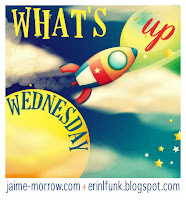 What's Up Wednesday is a weekly blog hop created by Jaime Morrow and Erin Funk to help writers stay in touch. It was spring for two days and now it's nine degrees and the wind chill is negative something. It's sunny so it looks nice out but I know that it's not. Fingers crossed that this is winter's farewell. Also to everyone getting even more snow, stay warm and safe.
What I'm Reading:
I finished Seraphina by Rachel Hartman last week and if you haven't read this book, I highly recommend it. Beautifully imagined world, characters that I never want to let go of, and great voice. Also dragons. Now I'm onto The Graveyard Book by Neil Gaiman (I must admit that I've never read any of his work before) and while I was thrown off by the style at first, I'm really starting to get into it now.

What I'm Writing:
Siren is coming along very slowly, but steadily. I'm already seeing a lot of things about the opening that need to be fixed in revisions…
8 comments
Read more

What's Up Wednesday is a weekly blog hop created by Jaime Morrow and Erin Funk to help writers stay in touch. It's spring break (though there's nothing spring about it) and I'm enjoying every minute of it.
What I'm Reading:
Still making steady progress on Seraphina and I would really like to finish it within the next couple days. I've also started reading a beta read and Miguel Street by V.S. Naipaul for class. It's a quick read so far but oddly written. I'm not quite sure how I feel about it yet.

What I'm Writing:
Weredragon revisions are done! I'm giving it a couple days break and then I'm going to compile it into a Word doc (I use Scrivener for drafting and revisions) so that I can give it a look-over and hopefully start querying again in the near future. It was my intention to think things over for a couple weeks before I started a new project, but then I got an idea (nicknamed Siren) and started work on it. It's going slowly so far…
8 comments
Read more

March 03, 2014
Another month has come and gone (though where it went I'm not entirely sure at this point). This post is a little late but in my defense I was in a car for most of the last day of the month.

Writing:
Word count: 10,042
I still don't have a specific new WIP, but I did manage to top January's word count easily. This is mostly short pieces and new scenes that I added to Weredragon in the course of revisions. I do intend to have a new project for March, finally.

Reading:
Read: 4
This brings my total up to 7, though in order to be on track I should have read 16 at this point in the year. Of those four, two were proofs and one was for class. The only book I finished for fun was Rose Under Fire by Elizabeth Wein which I definitely enjoyed.

Movies:
Watched: 3
This brings my total up to 4, when I should be up to 8. I watched Thor: The Dark World finally and enjoyed it so much. I love the first movie, but I have to admit this one was much better. I also watched Frozen which is ado…
1 comment
Read more
More posts